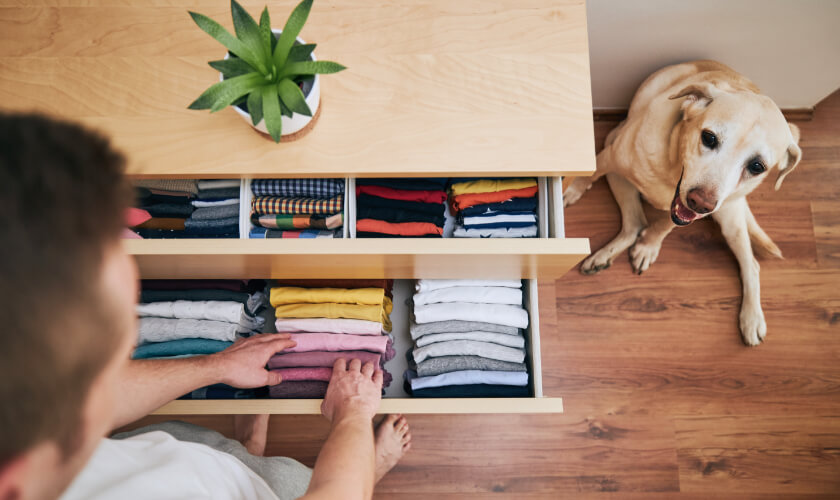 Keeping your drawers organized is difficult.

We understand the struggle, so we’ve come up with some helpful tips on organizing the ultimate men’s underwear drawer.

Whether you want four compartments or ten, there’s an underwear drawer organizer out there that’s perfect for you. It’s only a quick Amazon search away.

While there are a ton of different ways you could organize your underwear drawer, some may make your life a little easier than others. We recommend that you organize based on either color or underwear type, though each option has its pros and cons.

The first underwear drawer organization style to think about is organization by color. With this style, underwear style doesn’t matter, nor does brand or any other factor.

Pros to this organization style:

One major pro to organizing your underwear drawer by color is that it’s simple. If you wash a pair of red boxers and a pair of red briefs, you just put them with the other red underwear. This organization style is particularly great if someone else does your laundry or puts it up for you. This way, you can ask them to keep your drawer organized without it being a difficult task.

Cons to this organizational style:

While organization by color is simple, it may not be the best for you if you have a variety of different types of underwear, or if you buy your underwear in consistent colors. If all of your underwear are black, you can’t really organize them by color.

Additionally, if you have underwear in four or five different styles, organizing by color may have you digging through ten pairs of red underwear to find your red briefs.

The goal is always simplicity.

Pros to this organizational style:

Organizing your underwear drawer by underwear type is especially helpful if you have a variety of different styles of underwear. This way, each different underwear style has its own dedicated spot. If you’re going to the gym, for example, all of your performance underwear is in the same location, and you don’t have to dig around to find them.

Cons to this organizational style:

If you have one or two go-to types of underwear, organizing by style may not be the smartest choice for you. Likewise, you may want to look into a different organizational pattern if you buy a variety of different styles, but only one pair of each style. While organizing by underwear type can be an extremely efficient method in some cases, there are circumstances that make this method unhelpful.

How to Fold Mens Underwear

If organization is your goal, it’s important that you’re folding your underwear neatly, so they can be stacked or lined up. Boxers and briefs can be some of the most challenging styles to fold, but we have the perfect step by step guide on folding for optimal organization.

It’s important to revisit your drawer organization often. Not only does reorganization make finding the exact pair you want easier, but it’s also a great opportunity to get rid of old underwear and make room for a few new pairs.

Though underwear businesses are dedicated to producing comfortable, quality underwear, the true shining stars are the models in their ads and campaigns. For years, big and small brands alike have been showing the world drool-worthy men in underwear, and we’re ready to talk about our favorites.

It’s no secret that male underwear ads have changed over time, as have photo and video technology. This being said, many love the ‘vintage’ aesthetic, and we can’t help but love it, too. Here are our favorite vintage male underwear advertisements:

Tom Hintnaus was featured in Calvin Klein’s first male underwear ad in 1982. To this day, this shoot remains one of the best. Not only is the photo itself great in terms of the color and angle, but Hintnaus’ stance and awareness of his body takes this shot to the next level.

There may be some debate as to whether or not this is vintage, but the style is undeniable. Sabato’s 1996 Calvin Klein shoot was simple, and one of the company’s highest selling campaigns to date. Sabato was also featured alongside Hintnaus in Calvin Klein’s first men’s underwear shoot in 1982.

Men in underwear campaigns is already a win in our book, but that win is elevated when your favorite celeb partakes in a shoot. Whether that celeb is an athlete, actor, or musician, we’ve considered them for the sexiest underwear campaigns with famous men. Here’s our final list:

Seeing professional athletes shirtless may be nothing new, but these campaigns will have you reacting like you’ve never seen a man in his underwear before.

As part of the #mycalvins IRL campaign in the fall of 2019, Odell Beckham Jr. delivered an assortment of sexy shots. This series included edited, studio photos in Calvin Klein underwear, as well as unedited, “IRL” photos, taken while lounging at home.

There isn’t a person in the world unaware of who David Beckham is, but you may be unaware of his campaigns with the brand Armani. Beckham is a frequent model for Armani, but this shoot exceeds all expectations.

Cristiano Ronaldo is a world-revered athlete, and his physique definitely shows us that. In his shoot with Armani, Ronaldo delivered the perfect combination of mystery and expression that leaves you wondering why he hasn’t pursued a modeling career full time.

Actors have a lot of experience in front of the camera, which should make modeling easier. While this is not the case for every actor-turned-model, it’s certainly the case for these ones.

Noah Funk’s 2014 Versace campaign can be described in a few short words–decadent, outstanding, and marvelous, to name a few. Funk was consistently playing in main roles at this point in his career, and this campaign made major waves with his fans.

After his role as Christian Grey, seeing Jamie Dornan in his underwear is nothing new. This Calvin Klein shot from Dornan’s time as a model takes us back to 2009 and reminds us that while Dornan shirtless may be nothing new, it is still something to be excited about.

Musicians are performers at heart, and that may be what makes them so comfortable in front of the camera. These men don’t only put on a good show on stage, they put on a pretty good one in these underwear campaigns, too.

Bieber collaborated with Calvin Klein during their #mycalvins campaign, and was a hit with consumers everywhere. Coined the ‘Bad Boy Bieber’ collab by countless headlines and articles, this shoot garnered Justin and Calvin Klein a lot of attention, though not all of it was positive. There was a lot of debate online over whether or not Biebers ‘package’ had been enhanced.

Amidst his return to the music industry, Joe Jonas was featured in a Guess campaign that had his previous fans drooling and new fans pooling in. Though Jonas was featured fully clothed as well, his underwear shots from this campaign are the most popular of the set by far.

Mendes was featured in the fall 2019 installment of #mycalvins, and sent the internet into a whirlwind with his intimate pictures and six-pack abs. This was Mendes’ first underwear shoot, but the success of this shoot means we may get more in the future.